For several years, the Canadian aeronautical company Bombardier has been innovating by competing directly with the two leaders in the sector, Airbus and Boeing, with its range of CSERIES aircraft. Swiss was the first airline to welcome the CSeries into its fleet with the CS100 model, which had its first commercial flight on July 15, 2016.

Many airlines have ordered CSeries aircraft:

For us Canadians, we will have to wait for the reception of the aircraft by Air Canada or Delta Airlines to travel on it in North America.

Swiss was for us the best opportunity to discover the Cseries during a trip to Europe!

To be honest, my flight on the CSeries was quite unexpected! Swiss positions this aircraft on many routes from Zurich or Geneva. But for me, the schedules never fit my schedule to discover this aircraft on the Nice-Zurich route.

So what a surprise to see a change of aircraft on flight LX563, usually operated by an A319/A320. It seems that Swiss knew that a milesopedia editor was on board! 🙂

Welcome aboard the Swiss CS100

The aircraft is a single-aisle aircraft divided into 3 + 2 seats. The separation between business and economy class is only made by the small plastic card that you can see on the picture below:

This separation by a plastic card allows Swiss to modulate the size of its business class according to the traffic.

In fact, legroom and seating are identical in both classes. The difference: in rows of 3 seats there will be no one in the middle seat, in rows of 2 seats you will have no one next to you (preferable if you are traveling alone).

A view of the Nice Airport control tower from my seat.

The design of the seats is really successful and well thought out. Everything is done to increase legroom. 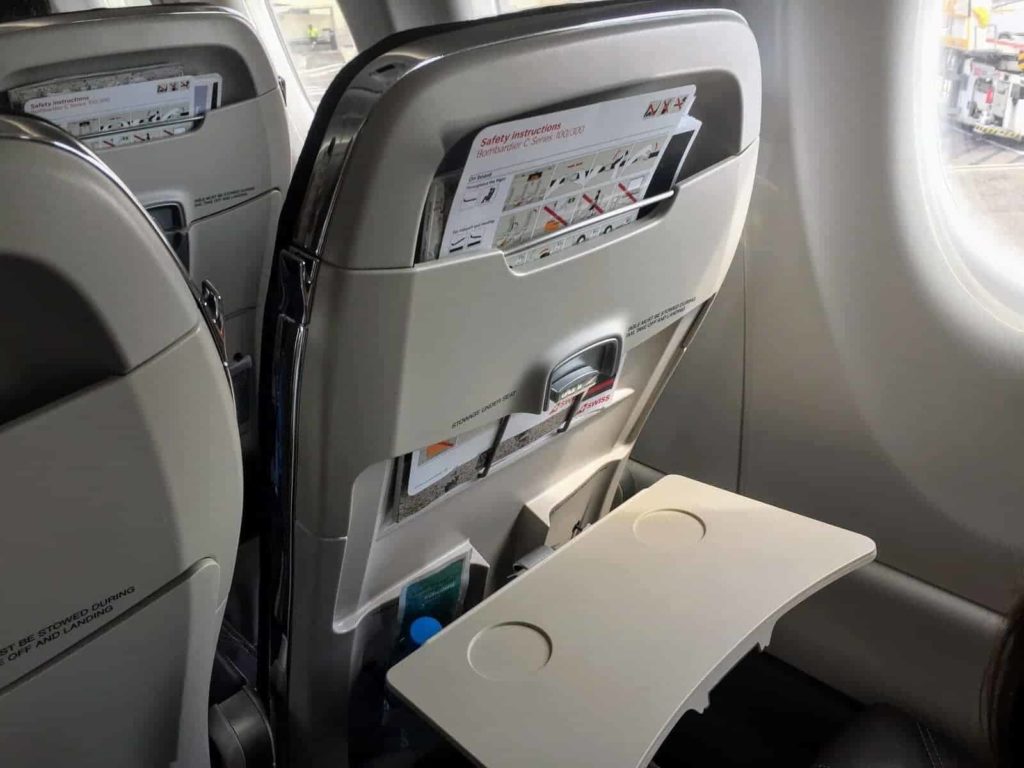 There is however little storage space, which is not really important for a short-haul flight like this. Just enough to fit two bottles and a magazine.

Note the hook on the edge of the seat to hang a garment or a small bag.

Here is a view showing the 3 + 2 arrangement. The passengers on the left side are staggered so that they are not disturbed by a reclining front seat.

My daughter is definitely attracted to the larger-than-average windows… which allow more light into the cabin!

Seats can recline, and armrests can be raised. You can see that the legroom is really generous.

The luggage compartments are also generous.

I would say that they are even larger than those found on many long-haul aircraft: the stroller fits here without any problem in any direction, whereas I have to position it in a specific direction every time so that it can fit in the trunk of other aircraft. I was also able to add 2 backpacks and a carry-on bag on the side! Bravo Bombardier for thinking about the comfort of the passengers!

Take-off and in flight

The cabin seems to me to be slightly quieter than on other medium-haul aircraft of the A320 or B737 type. The takeoff seems quieter to me, the engine noise being less noticeable from the cabin.

View of the terminal 1 of Nice Airport.

Many business jets are parked in Nice during this summer period.

The fire station and Terminal 2.

And some views of Nice and its Promenade des Anglais as you pass over the airport.

The bay of Villefrance-Sur-Mer next to the Swiss winglet.

Bye Bye Nice, city of the Alpes-Maritimes, between sea and mountains!

Screens showing the route and safety instructions are above the seats next to the air conditioning and light controls. 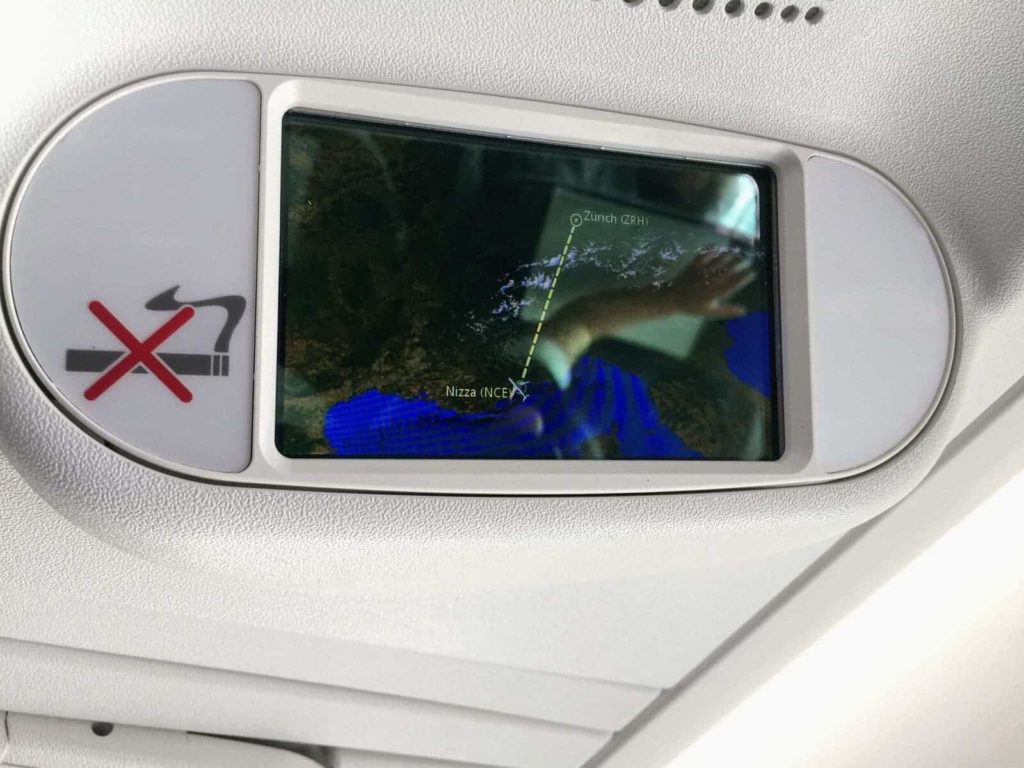 On this short-haul flight of less than an hour, a small snack is served by Swiss and proves delicious.

The cabin is extremely bright thanks to the oversized portholes. It is very pleasant!

The business class toilet is located next to the cockpit.

After a flight over several lakes, we arrive in Zurich on time.

As we land, a Singapore Airlines A380 is about to take off for Singapore.

In fact, these short/medium-haul aircraft offer the comfort and technological advances of the new generation of long-haul aircraft! Let’s hope that the aircraft deliveries to Air Canada and Delta Airlines will encourage other airlines to order many CSeries aircraft… for our comfort and travel pleasure!