I had the chance to test these two lounges during a flight from New York to Montreal. Story in pictures.

I booked the ticket on the American Express travel site. Having signed up for a Carte de PlatineMD from American Express recently, I took advantage of the $200 travel credit. The itinerary and the flight are nothing spectacular, a weekend in New York, so we are talking about a flight on a short-haul aircraft to La Guardia.

At Montreal Pierre Elliott Trudeau Airport there is no Priority Pass lounge in the terminal for flights to the USA. On the way back, with the American Express Platinum card, and having a flight with Delta, I had the choice between the Delta Sky Club lounge and the American Express Centurion lounge.

The lounge is located before security in Terminal B between Halls B and C. Usually the fact that you have to go through security when leaving the show is a disadvantage because you have to take into account the waiting time etc… But on the other hand, it was a good thing. Indeed my Delta flight leaving from Terminal D I didn’t need to go through security twice, as the terminals don’t communicate on the “airside“.

You have to go through an elevator in the food court. The lounge is located on the 3rd floor. The same entrance is found in other Centurion salons such as the one in San Francisco. With the American Express Platinum card, admission is free as well as for a guest. The agent explained to us how to connect to the Wifi and told us how to get to terminal D, specifying the time and a schedule for leaving the lounge.

The lounge is composed of 3 parts. The first is a corridor between two rooms. This one contains benches with cushions facing televisions. These are not noisy. As in the rest of the living room, electrical and USB outlets are abundant.

The first room contains a bar and restaurant service. All drinks, alcoholic or not, are free. The offer is correct, we talk about sparkling wine instead of champagne but it is still drinkable 🙂 The food is also good, much better in any case than in the usual salons.

The service is fast, there is always someone coming by to clear the unoccupied tables and refill the drinks.

The second room is the “office” area with a communal table, a small office area and chairs.

There is a beautiful view of the tarmac and the slopes.

The only shortcomings are perhaps the size of the lounge which is small especially since it potentially serves the 4 terminals of La Guardia and its hours because it closes at 8 pm.

To get to the lounge from the American Express lounge, you have to take the Purple shuttle at the departure level. Delta operates from terminals C and D, each with a lounge. We were through security in 5 minutes and headed to our terminal lounge. We had already visited this show earlier this year.

Access is also possible with the American Express Platinum Card, however, you must have a ticket for a Delta flight that leaves within the day. The living room is relatively new and large so it feels less like a closet.

The office area is the plus of this living room as the work spaces are large.

There is also a corner to be a little more isolated than in the chairs of the main part.

The bar where you can order free drinks like a glass of wine. Spirits are not free and can be paid for in cash or in miles. My Delta Skymiles account is rarely used so I have a balance of a few thousand miles. Not of what to go far, therefore we took advantage of it to order two glasses of champagne to 700 miles the glass.

The weather was not very good in New York that day with a lot of fog. Delta’s mobile application, which is very well done by the way, warns us of one delay, then another and finally a third.

Result after a delay of 3 hours, we are redirected towards the terminal C where our flight was finally to leave but on the way I receive a notification ofcancellation of the flight. We find an alternative flight directly on the application. In the event of a delay due to bad weather, the company is not obliged to reimburse the costs incurred by the delay.

But thanks to the American Express Platinum Card ‘s trip interruption and flight delay insurance we go directly to a hotel next to the airport, a Marriott, to get a room.

It’s an airport hotel but still quite decent especially when you want to find a bed after a relatively long waiting time. Having a Gold status at Marriott we will have a free breakfast the next morning. I’ll do a more complete article on the refund process.

Both shows have decent but very different offerings. The American Express lounge is perhaps most notable for its comfort, although Delta’s is larger if not spartan. The airline is less generous with food and beverage access. But in both cases I was happy to be able to wait (for a very long time) in a lounge instead of waiting in the terminal. 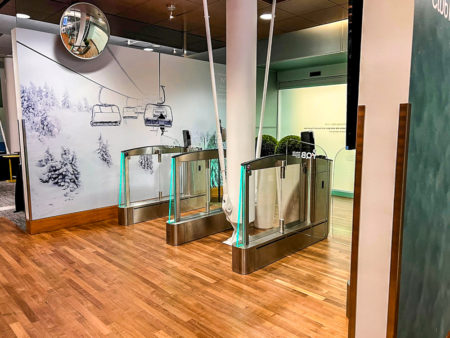