The long awaited moment! After a short flight from Montreal, I found myself at 7pm at New York JFK airport. My next flight will be in First Class on a British Airways Boeing 747 – the Queen of the Sky.

My flight from Montreal landed in Terminal 8, and I have to go to Terminal 7. Although the terminals are next door, it took me a good 20 minutes to get there!

Within the New York JFK airport

Let’s go for long corridors in Terminal 8. No doubt, we are in New York.

Direction the AirTrain, the train allowing to go from one terminal to another.

In passing, I see a US Airways plane… a company that no longer exists since it was bought by American Airlines. They take a little time to repaint the acquired aircraft!

By the way, as you leave Terminal 8 – or “American Airlines Terminal”, a glimpse of the company’s various logos.

Changing the terminal means leaving the “Security” area. If my stopover had been longer, I could have gone to New-York in a few hours. That will be for another time 😉

I finally reached the AirTrain, Terminal 7 is not far away.

And here I am, a short one minute trip and I’m in Terminal 7 or “British Airways Terminal”.

No doubt, we are here in New-York with the famous yellow cabs.

Several signs indicate the paths to the different registration areas.

This is the business class area (Club World), with little traffic.

I go to the first class area (British Airways First).

Since I am traveling on an award flight (paid with miles), there is normally a fee for any changes. The agent decides to go see his supervisor and I wait in the very “British” chairs. 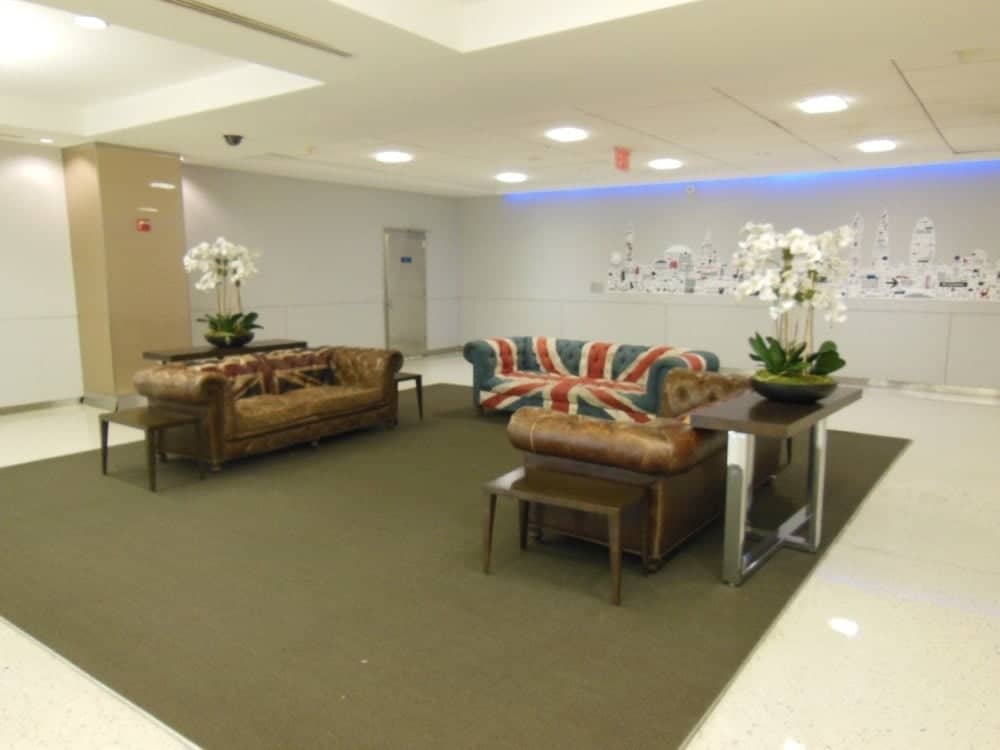 5 minutes later, the agent comes back with my new boarding pass: I’m now leaving at 8:15 pm, in 30 minutes! And what’s more… in seat 1A normally reserved for the most frequent British Airways passengers (with a high Oneworld status).

A short passage through security (2 minutes) and I am faced with a difficult choice: which lounge to choose to relax in before boarding?

This will be the Concorde Room, exclusively reserved for First Class passengers.

A small glimpse of this living room, with a style that I would describe as “old-fashioned British”.

There is the possibility to have dinner on the spot, I would only take 2 glasses of champagne and some cheese.

And I sit next to the Business Center to admire the view with a setting sun.

But it is already time to join my plane. To tell you the truth, I’m glad I moved my flight forward by almost 3 hours. I had planned to have dinner in the lounge to get as much sleep as possible during the flight, but I ended up having dinner on the plane! The visit of the other fairs will be done next time.

The boarding area is very busy, fortunately, there is a dedicated line for First and Business Class passengers. The order is scrupulously respected.

A father and son boarded just before me and headed upstairs in business class.

As for me, it will be all the way to the left… towards seat 1A, with a brief passage in front of a business class section.

Here I am, alone, in first class. So I take the opportunity to make a maximum of pictures.

The hostess, seeing that I take a lot of pictures, offers to immortalize this moment, sitting in my seat 1A.

Then she brings me back my “welcome kit” which is the product kit (for men) as well as a pair of pajamas in my size.

A small tour of the menu and drinks that will be proposed to me this evening.

I open the blind that covers my two portholes to see that we are already leaving the door!

I can stretch out my legs, savor my glass of champagne, we will soon take off. A Royal Air Maroc b787 is before us.

The First Class cabin is almost full. Although the seats 1A and 1K appear to be close on the cabin plan, I am still far from the young woman in 1K.

Shortly after takeoff, I went to the bathroom to change into my “pyjamas first”.

To my surprise, the toilets are not very big… but they do have a porthole 🙂

Back in my seat, the table is set: a new glass of champagne awaits me with appetizers.

While eating, I take the opportunity to test the screen, very pixelated. It will only show the map anyway because I won’t be watching a movie tonight.

After the appetizers, the starter: lobster.

Followed by a very tender meat as a main course accompanied by an excellent glass of red wine.

This will be followed by a cheese plate. I won’t have dessert.

The hostess offers to prepare my bed for the night. 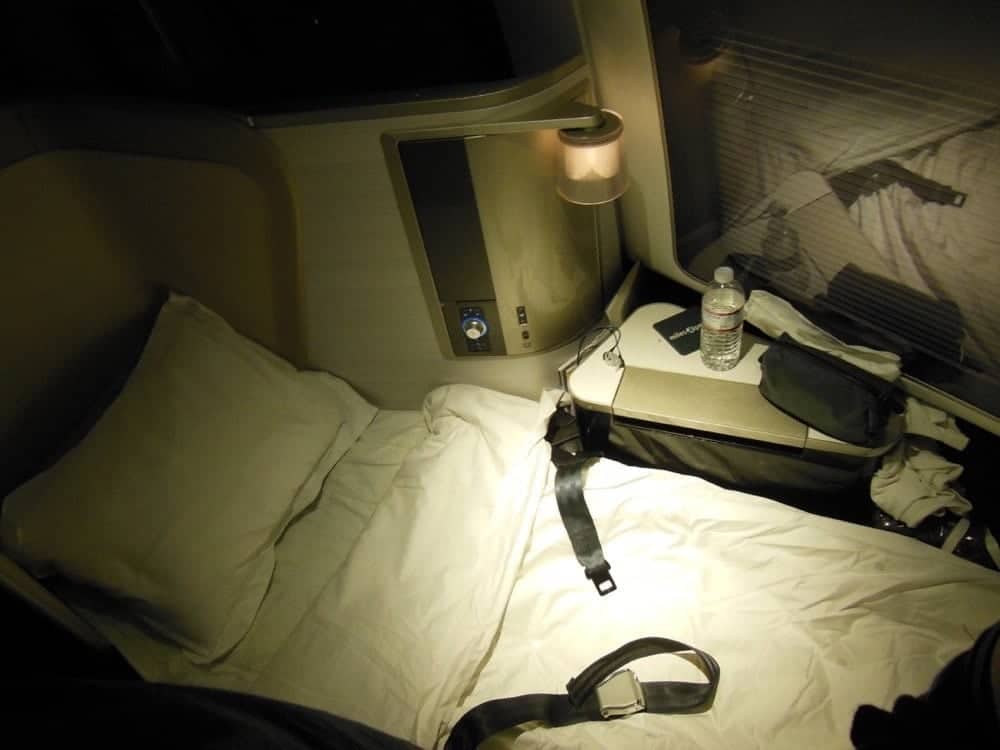 Comfortable no? In any case, it was because I was able to sleep a good 4 hours, which is rare for me on a plane! Actually, I was woken up by the stewardess 10 minutes before landing. She brings me a coffee, and I decide to open the blinds to enjoy the daylight and the landing. I missed breakfast (I’ll have it in the living room upon arrival!).

And here we are, arrived in London! The two giants of the sky: the Boeing 747 of British Airways and the Airbus A380 of the Australian company Qantas.

After a short taxi on the runway, we arrived at Terminal 5, the one for the international flights of British Airways, full of B747.

It’s time for me to leave this British Airways first class to join the “Arrivals lounge” of London Heathrow before catching my flight to Amsterdam! A last goodbye to the plane that brought me here!

This flight was excellent. The first class… was a first for me. Some call British Airways First Class the “best business class ever”. It is true that I found the front of the cabin, in the nose of the B747, quite full (14 seats in such a small space while other airlines just put 6-9 at most).

On the other hand, the service was excellent, as were the meals and alcohol served.

I’ll soon have a comparable one when I travel on my return flight with Lufthansa… also in First Class.

The maps to make this trip