This is a flight for a short stay in France, I had explained in a previous post how I arrived at this quite simple trip. Here is the first segment.

After Washington last month, it is for family reasons that I am returning to France for a long weekend. This flight report will have nothing glamorous, for that we will have to wait for next week with Jean-Maximilien’s trip in First Class. But we want to share all our travel experiences, the exceptional ones as well as the more ordinary ones 🙂

As I had explained in my post about finding this flight, I turned to Air Transat for the flexibility of the cities served directly. Bordeaux and Toulouse being close to my destination, direct flights to these two cities were very attractive for a 4 days stay.

I arrived at the airport with the 747 shuttle. This one takes longer to reach Pierre Elliott Trudeau with all the work in this part of the island. It took me a good hour from the Mile-Ex district to get there.

I didn’t have any luggage to check, so I went straight to the security checkpoint where the wait was 20 minutes. Thanks to the TD VISA Infinite Privilege card, I was able to use the ticket cutter and 5 minutes later I was “airside”.


I then went to explore the terminal. This one has known a big change with the opening of 6 new doors in the international part on May 10th. There are also new dining areas at Gates 52 and 53. I had my reservations when I saw the virtual renderings on the internet, but in person the new part is nice: very bright and you can see the planes! The avgeek in me was satisfied. 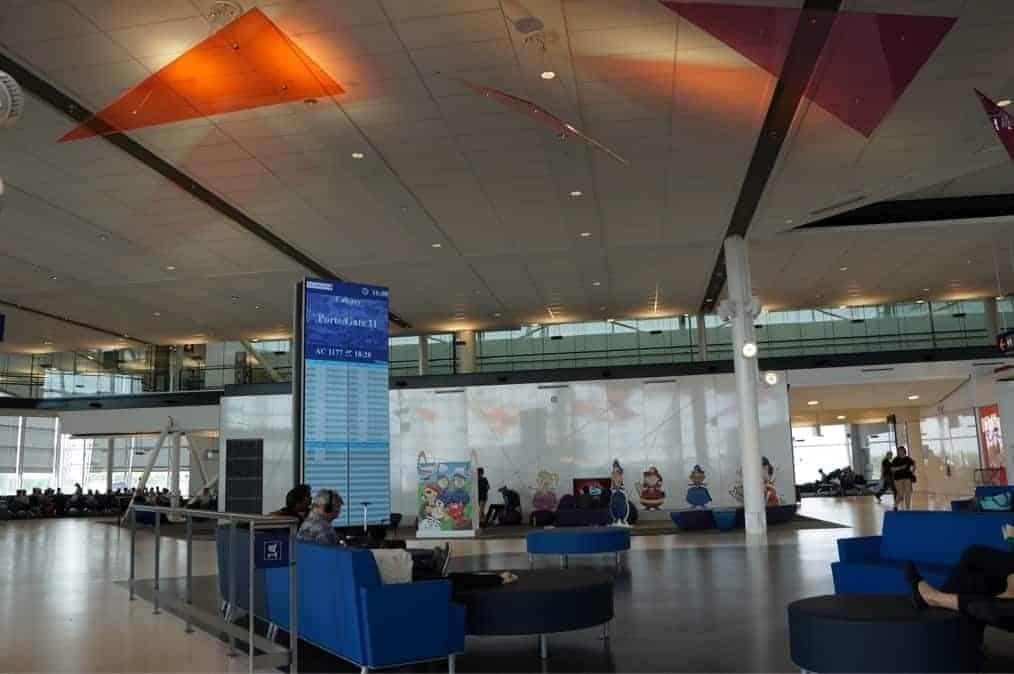 It was time to do some spotting.

My Priority Pass membership attached to my American Express Platinum card gives me access to the National Bank Mastercard Lounge. Not the most elegant, it is however well supplied with alcohol and a decent offer of food. On the other hand it is very busy.

It was time to leave for gate 63 where my flight was leaving from. Priorities were scrupulously respected (Club Class, people who bought an Option Plus Pass). The boarding ended on time, the captain indicating us a flight time of 6h50, relatively long. It’s true that during the flight, the displayed speeds were not stellar.

The cabin is relatively new, but the lack of separation really gives it a hangar feel.

The seat is comfortable. I bought a comfort kit that contains a blanket, an inflatable neck pillow and a mask for 10$ (7euros). It is also possible to purchase an “Options Plus” pass when making a reservation:

This option costs between $100 and $200 round trip depending on the destination and the seat chosen.

The meal is served 1h30 after take-off after an aperitif (paying for alcoholic drinks). The food is really the weak point of Air Transat. All this does not give very much desire. It is quickly digested: a sandwich and a cookie!

The staff was really nice: present, making appropriate announcements at the right times.

The cabin has modern lighting, which is less painful for the eyes than the old neon lights in the dental office.

One hour before arrival a snack is served. Here again, we are far from a complete lunch…

We arrived on time at Bordeaux-Mérignac. From there I took the bus that connects the airport to the train station for 1.5 euros. It’s cheaper than the shuttle that used to exist but much longer.

Yes the direct flight is really very convenient, the cabin is quite modern with an IFE that holds the road. But the food is really the weak point of Air Transat. It’s a shame because the staff was very pleasant.