First step of my transatlantic round trip in first class, here is a presentation of the flight taking me from Montreal to New-York on American Airlines.

This flight cost 7,500 avios miles and $59. Thanks to him, I was able to access the First Class flight offered by British Airways to New-York JFK. Indeed, in Montreal, British Airways offers “only” economy or business class (which is already very good!).

In the middle of a sunny day in Montreal, I join the 747 bus that will quickly take me to the Montreal-Trudeau Airport.

Once you arrive at the airport, head to the transborder terminal where flights to the United States depart.

We go along the corridors, rather empty at this hour (14h30).

All American companies have their own check-in counters.

Since I had already checked in for my flight and had the ticket in electronic format in my iPhone, I went directly to the security lines. These are not very busy. I quickly realized that I had better get in the general line because the one reserved for holders of certain credit cards or status in the airline programs was full and didn’t seem to be moving!

The passage through security will take less than 5 minutes, towards the customs! Again, this will be a very fast passage (less than 10 minutes).

Once through customs, it is the traditional passage – obligatory – in the corridor of Duty Free. Remember: it is not necessarily interesting to buy products there!

A quick look at the flight screen… my flight is well displayed on time, so I just have to find a seat to work on milesopedia.

But before, we go along the various restaurants proposed in the terminal.

Let’s move on to the rest areas. In this regard, I would like to congratulate the Montreal Airport for having well thought out rest areas: electrical outlets, play areas for young children, deck chairs. It’s nice!

I settle down to observe the passage of some planes while enjoying the sun. However, there are no electrical outlets here: it is intended for relaxation!

A plane… special that is not really to my taste.

During my moment of relaxation, the YULi application made by the Montreal Airport, which I just downloaded, keeps sending me gate changes and promotions. I decide to disable all notifications because it’s really annoying. I hope the Airport will correct this!

Let’s get down to business: boarding. Having a single seat with no one beside me, I don’t rush to get on board. Anyway, my carry-on bag will go in the hold, as the luggage compartments are not big enough. Tonight’s aircraft is an ERJ 145.

I took a seat on board. The single-aisle aircraft is configured as a 2-seater – 1-seater.

The seat is old, but still comfortable with decent legroom for a plane of this size.

We get ready to take off, we have a beautiful sight of the Control Tower and the Marriott Hotel.

We cross the path of some very different aircraft before going to the runway.

A fast takeoff, we fly over the Island of Montreal before quickly crossing the border. In a few minutes we pass by the Burlington Airport, which competes with Montreal with its low cost flights!

A quick trip to the bathroom to see what it looks like on a small plane like this. Really amazed at the space given! As big as a Boeing 747!

The service begins. It will be limited to non-alcoholic drinks and the traditional bag of peanuts. This is normal for a flight of this duration.

We arrive rather quickly on New York with a sight of Central Park. Unfortunately, sitting on the left side, I can only see Manhattan for a few seconds before landing, the plane having made a big loop to wait because of the traffic. 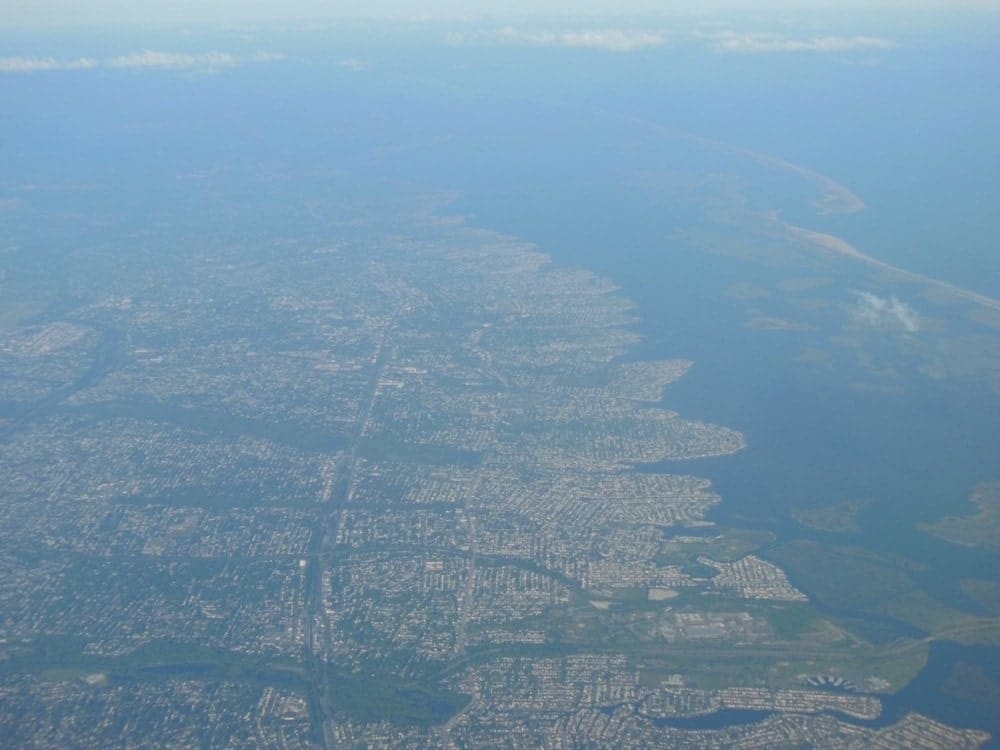 The landing is smooth and we pass in front of the Terminal 7 or “British Airways Terminal”. A flight leaves every hour to London, and each one is operated by a Boeing 747. The one I’m about to take is among them.

We also see other aircraft, unknown in Montreal.

Here we are at the door. Let’s go to the second step of my trip, the flight in First Class on a British Airways Boeing 747!

The maps used for this trip

To complete this portion of the transatlantic trip, I needed British Airways Executive Club air miles (obtained with American Express Membership Rewards cards) and Scotia bonus points (this allowed me to pay the taxes!)