After our 15 hour flight from Toronto we had one more flight to Fukuoka. And not in just any device.

Eva Air is a Taiwanese company that has aircraft with Hello Kitty colors. Each aircraft has a theme and can be found on regional or international flights. A dedicated website provides information on the routes and aircraft. My flight was under the effigy of Bad Badtz-Maru, a slightly mocking penguin.

It’s raining when we are about to board, so I don’t have a nice picture of the outside but here is the aircraft, an Airbus A330-300, classic for a regional flight in Asia.

As in Toronto, our passport is checked before boarding to speed up the process.

The video is also very “Hello Kitty”, and well after 15 minutes we have the impression to be brainwashed.

In Business Class, you will find the Bad Badtz-Maru pillow…

And even the map with instructions in case of emergencies… 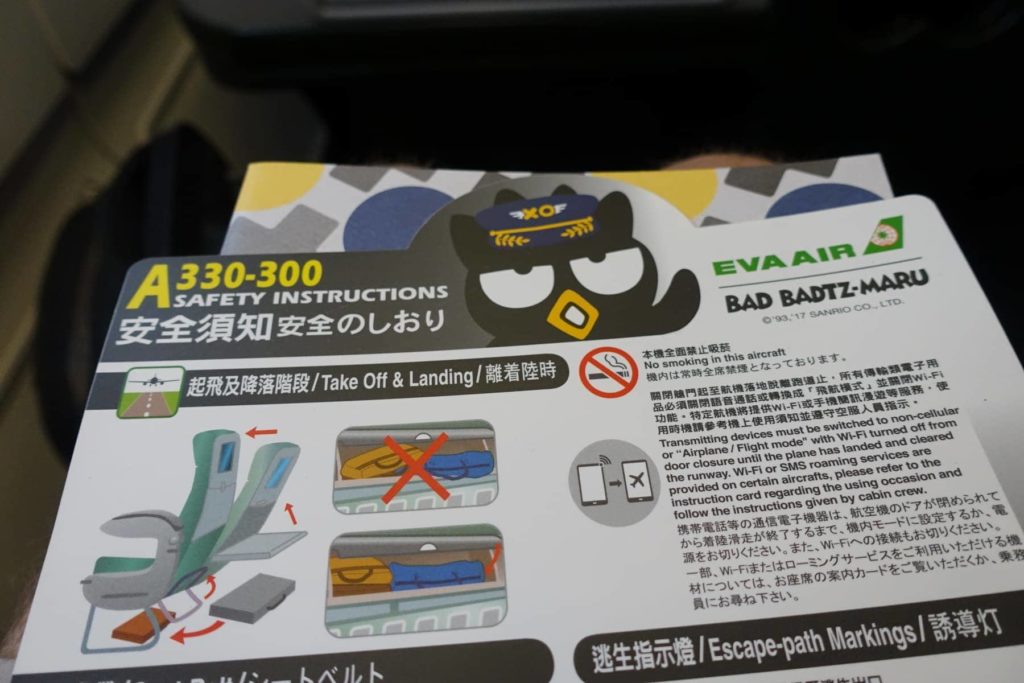 It stopped raining, the captain indicates us a flight time of 1h40 to Fukuoka. 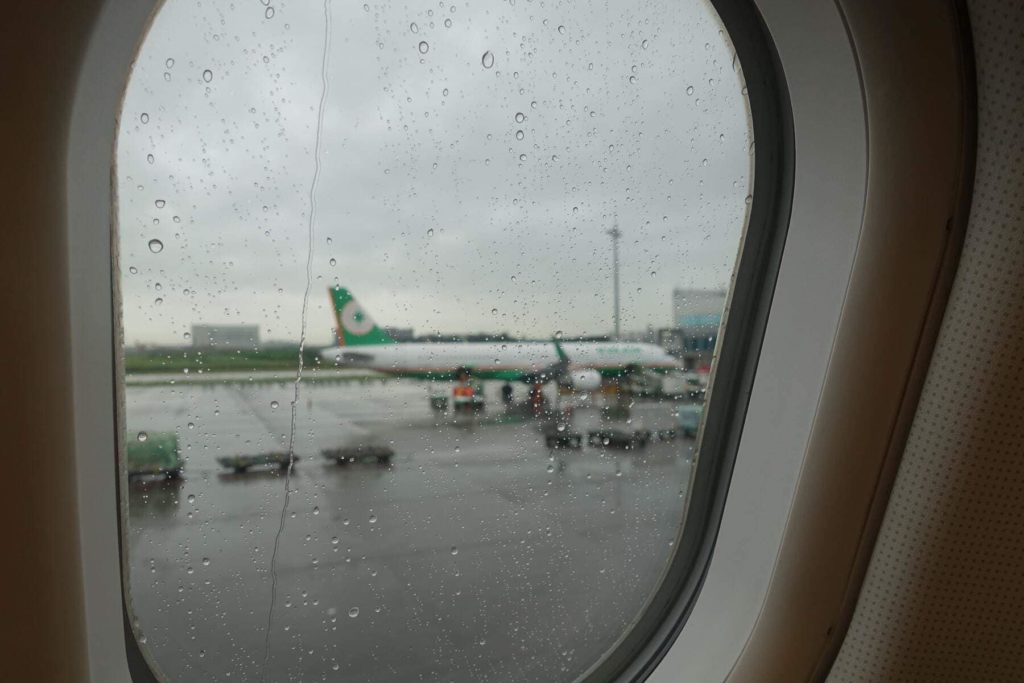 We push back to the hour, the sky clears little by little. In the background, you can see a Boeing 747 that Eva Air used for its route to Vancouver before it was withdrawn from the fleet after a last flight to Hong Kong. This is good news because the flight to Vancouver will then be operated by a (more modern) Boeing 777.

The aircraft goes to the runway, positions itself for takeoff and nothing happens… After a while he starts to drive but without taking speed and redirects himself to the terminal. Bad sign! The captain announces an anomaly in one of the engines. A group of service cars approaches, the engine is opened and a change of part has to be done. In the end we will leave with 45 minutes of delay. The staff takes care of the cabin: drink service and some appetizer cakes. Very reactive, passengers in connection with Fukuoka are taken care of by the head of the cabin. We stay quiet in our seat, a little delay means more champagne 😉 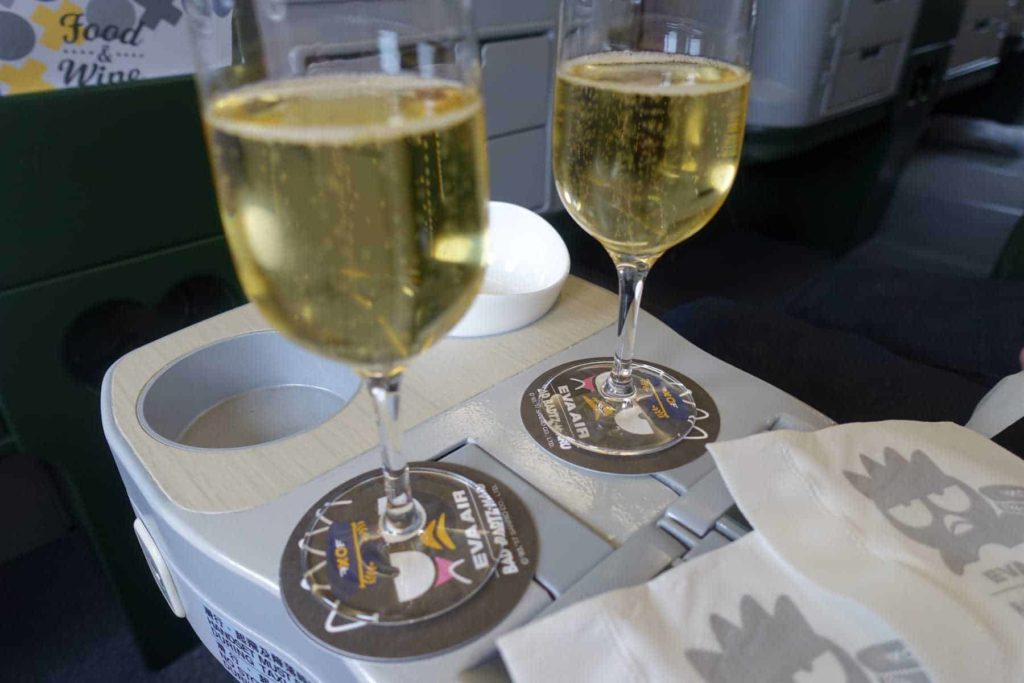 We finally take off, bye bye Taipei, we’ll come back to visit you more! 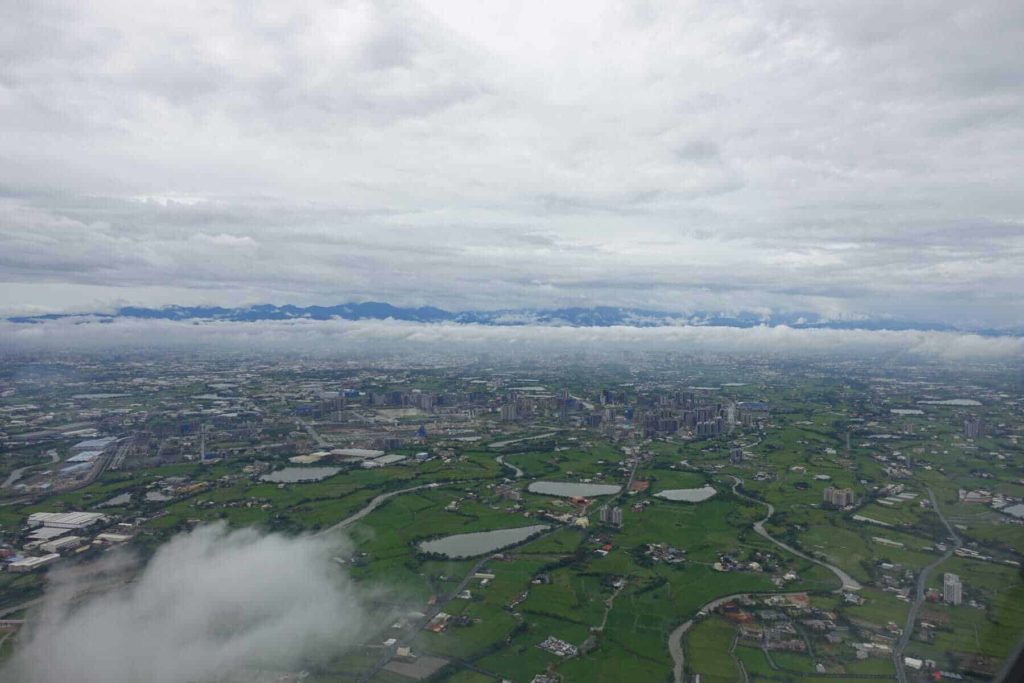 After some turbulence at takeoff, the staff is busy backstage preparing the meal, also ordered in advance:

We find there also a beautiful presentation. 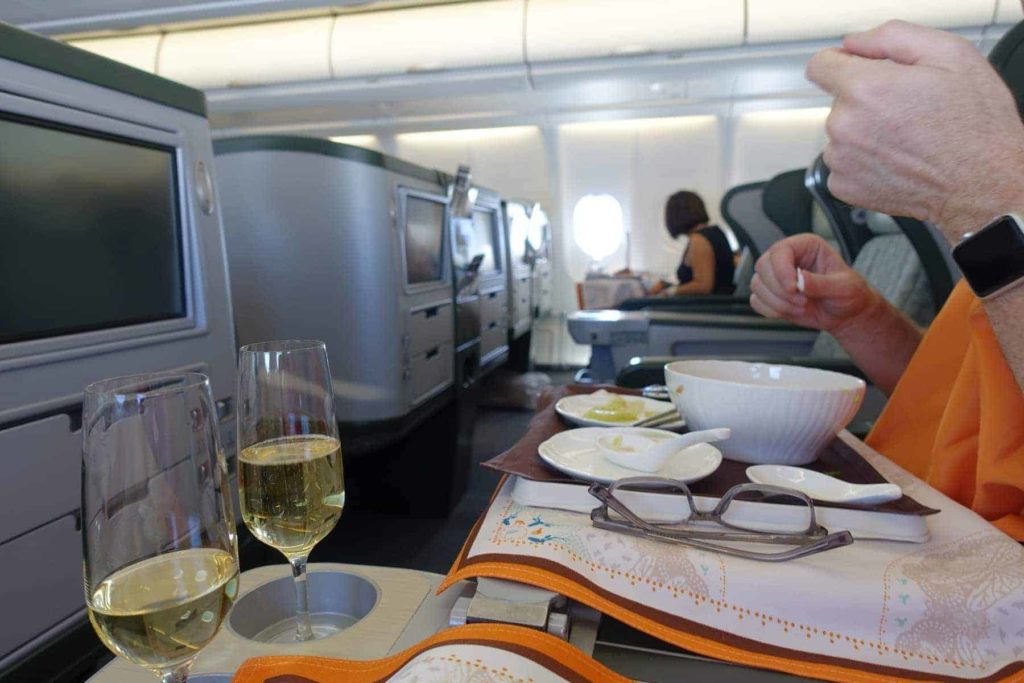 After a small nap we arrive at Fukuoka where the weather is splendid, the approach is very pretty:

The airport is divided into two terminals, you have to join the one for domestic flights to take the metro, the city being only 2 stops from the airport.

Although the flight was very late, we had a good time. The “Hello Kitty” side is fun, although long-haul flights have more “goodies”, especially for children. The staff and service were impeccable as on the flight from Toronto.