I planned this trip several months in advance, specifically choosing a round trip flight, in First Class, from Paris to travel both ways on the flagship aircraft of Etihad Airways: the A380.

And I had chosen to do the night trip (6h30 flight) and the day trip (longer flight: 7h30) to share the two options with you! Unfortunately, as is often the case in travel, not everything goes as planned.

On our outbound flight, Etihad Airways chose – at the last minute – to replace the A380 with a B777. In the jargon, this is called an“aircraft change“, the dread of any #Avgeek like me who has meticulously planned these flights to travel with a specific aircraft.

Disappointed, we thought that this would at least have the merit of introducing us to the two radically different types of First Class. And yet, this outbound flight in First Class on a Boeing 777 went really well.

So I moved heaven and earth to get us moved on this flight:

I saw on Expertflyer that there werestill 2 seats available on this flight! Audrey then said to me: “let’s go to the airport and try something!”

We left the Al Maha Hotel , a Luxury Collection Desert Resort & Spa, Dubai around 2pm to arrive at the Abu Dhabi airport around 3:30pm, at the Etihad Airways Guest Services First counter. 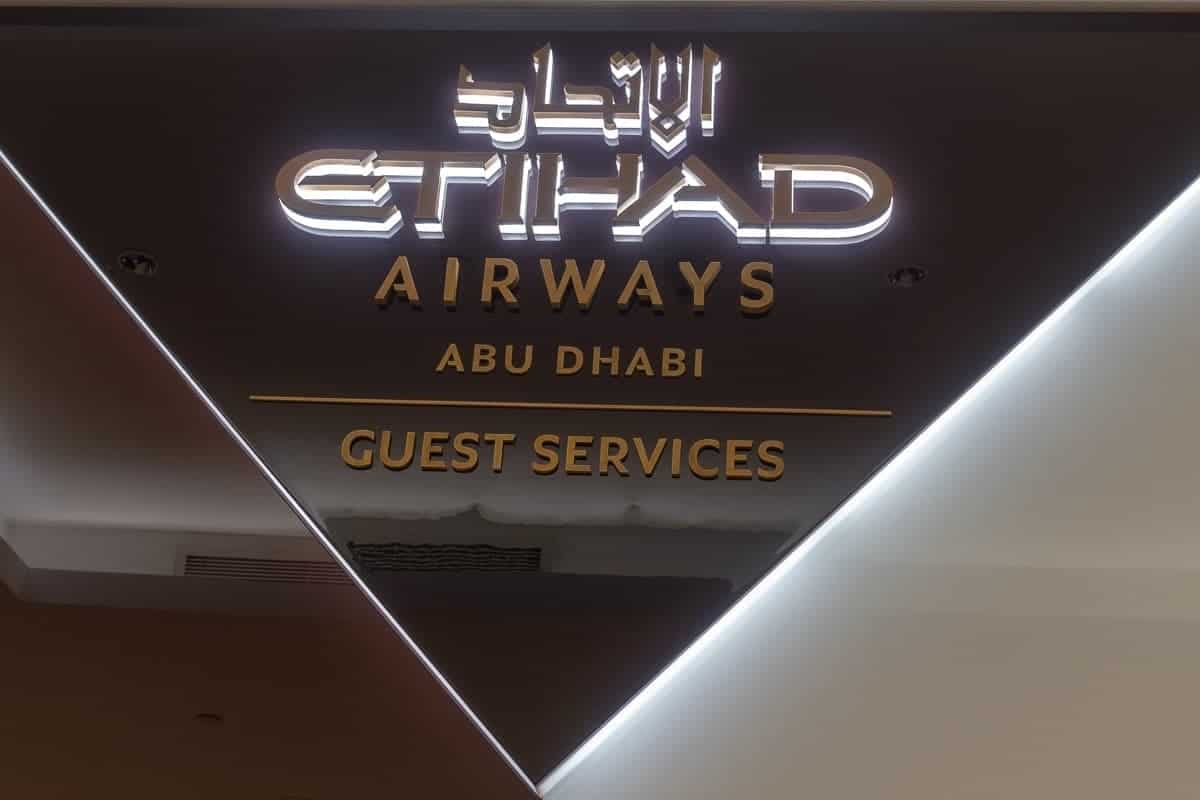 Understanding our “disarray”, the customer service agent also moved heaven and earth for almost half an hour … coming back with our 2 tickets for the flight on A380!

Relieved, we went back to see the sunset on the Mosque, close to the Airport, before bringing back our rental car and going to the lounge. 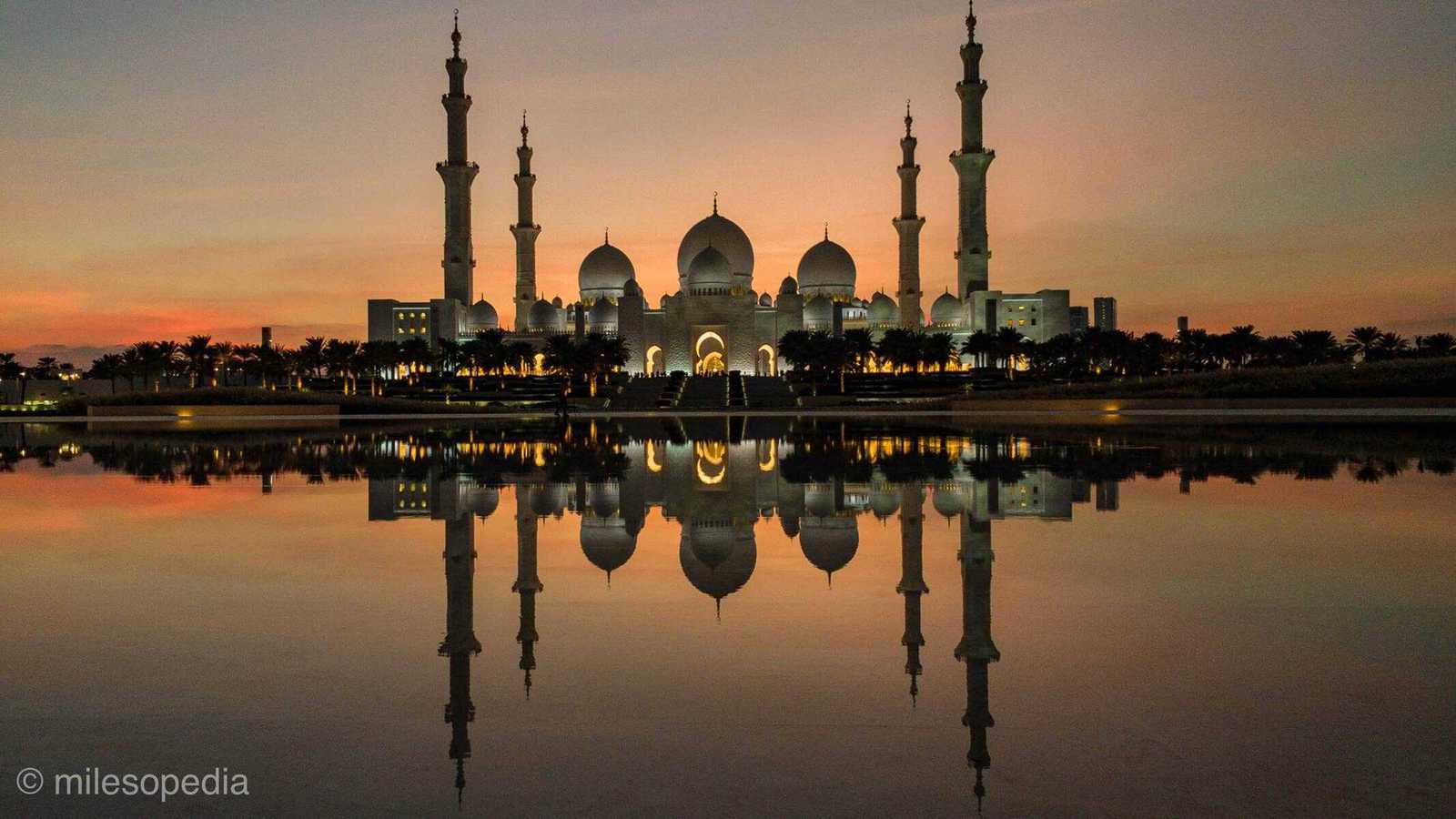 Our flight in First Class Apartment – Etihad Airways A380

We leave the lounge and head for our boarding gate at the end of the terminal.

Unlike Lufthansa, which will assign a person to accompany you to the aircraft door when you travel in First Class, ground service is not the same for Etihad Airways. The corridors are crowded, and a nice walk awaits us!

Once at the gate, the pre-boarding process has begun: passengers are checked in to pass through a “buffer” room before boarding.

First and Business Class passengers have a dedicated line, which allows us to avoid the queue. In the “buffer” room, a space is dedicated to “Premium Boarding”. 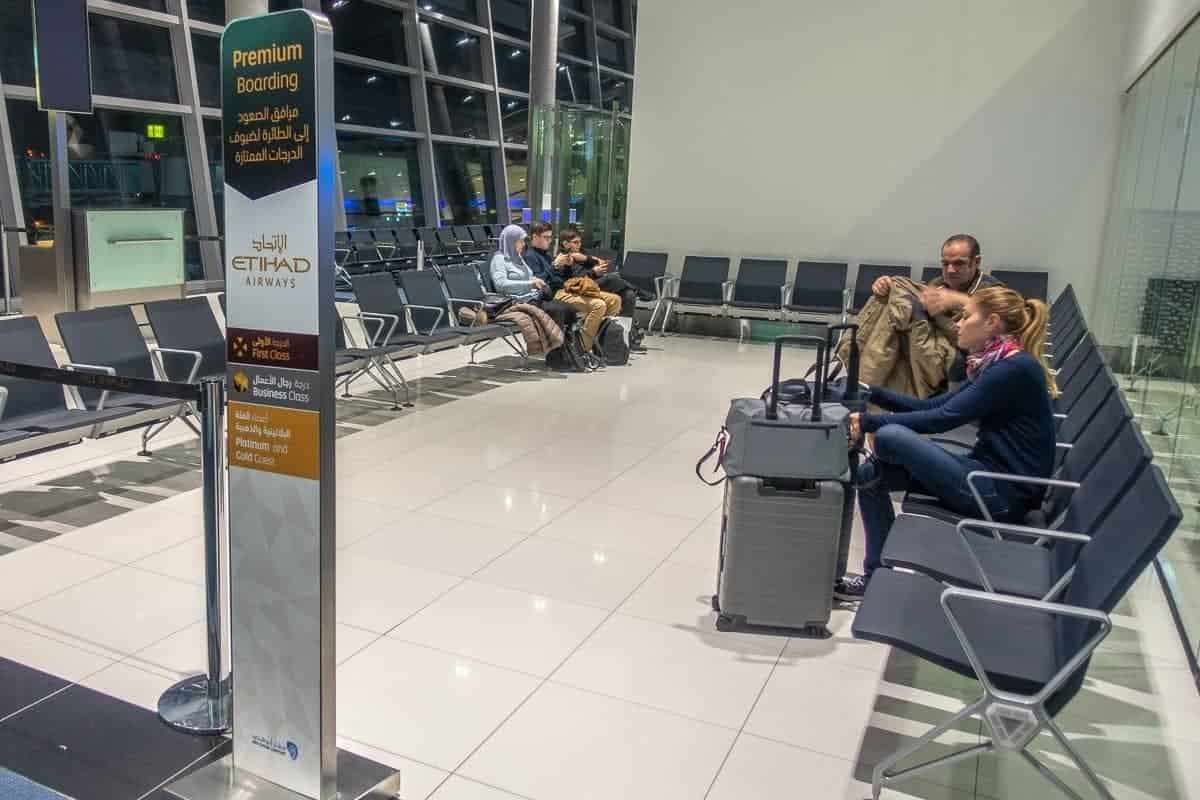 Shortly thereafter, First Class passengers are invited to board. The Etihad Airways A380 is distributed as follows: 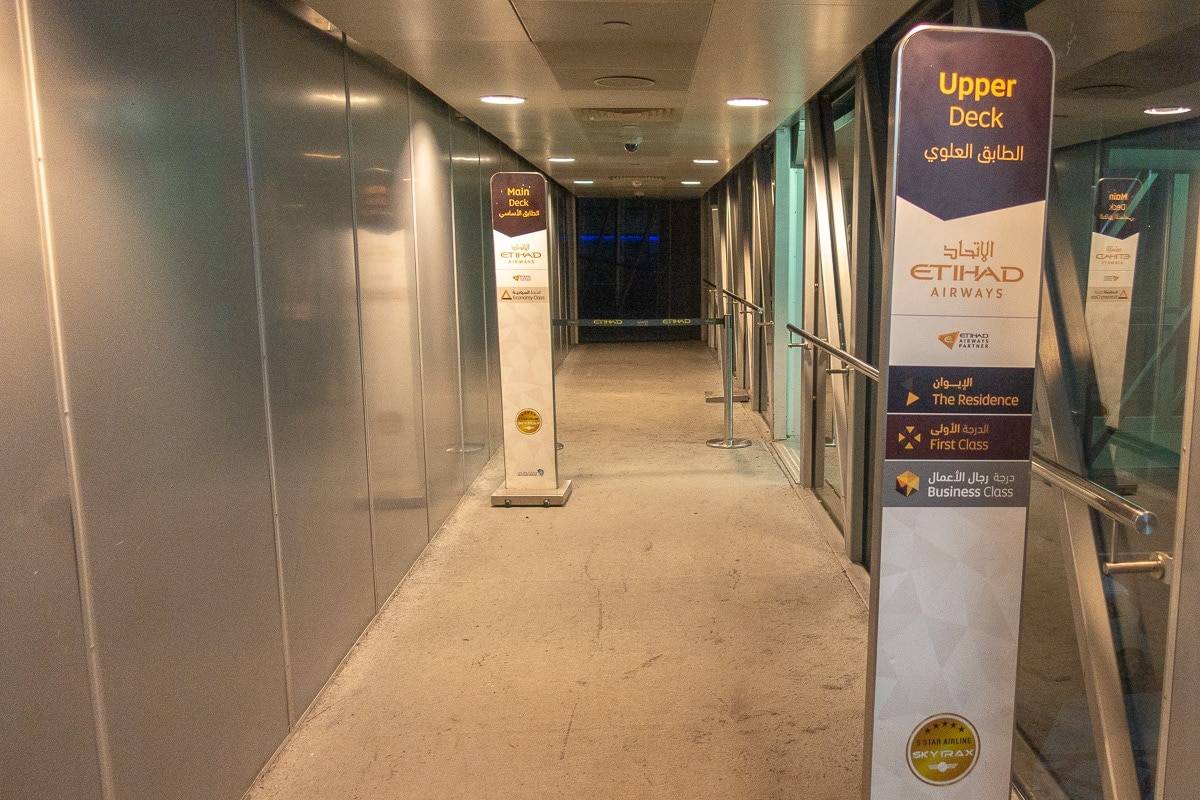 After the hustle and bustle of the terminal, we find the serenity of the First Class cabin, accompanied by the very specific Etihad boarding music! For those who want to listen to it while reading the rest of the report, here it is:

Here are some views to share with you different details of this sumptuous cabin:

Having taken the last two available seats, we had no choice…. and were separated by the corridor.

But those who know me… know that in such a situation, I try to negotiate something! In the meantime, I take the opportunity to photograph our “temporary” chairs.

These “apartments” are usually not taken because:

But hey… you can’t deny the quality of the facilities!

During a good ten minutes, I take advantage of it to make a maximum of pictures… while enjoying the champagne served and resservi… The man is satisfied!

We can see another apartment arrangement, the most desired one since it offers:

Like what… even in First Class there can be “good” and “not so ” seats!

The chief of cabin comes back to us with 2 new apartments, adjoining: 2 businessmen, traveling alone, have agreed to let this couple enjoy apartments stuck together! 😳

My apartment will be the 1H (opposite The Residence) and Audrey will have the 2H. 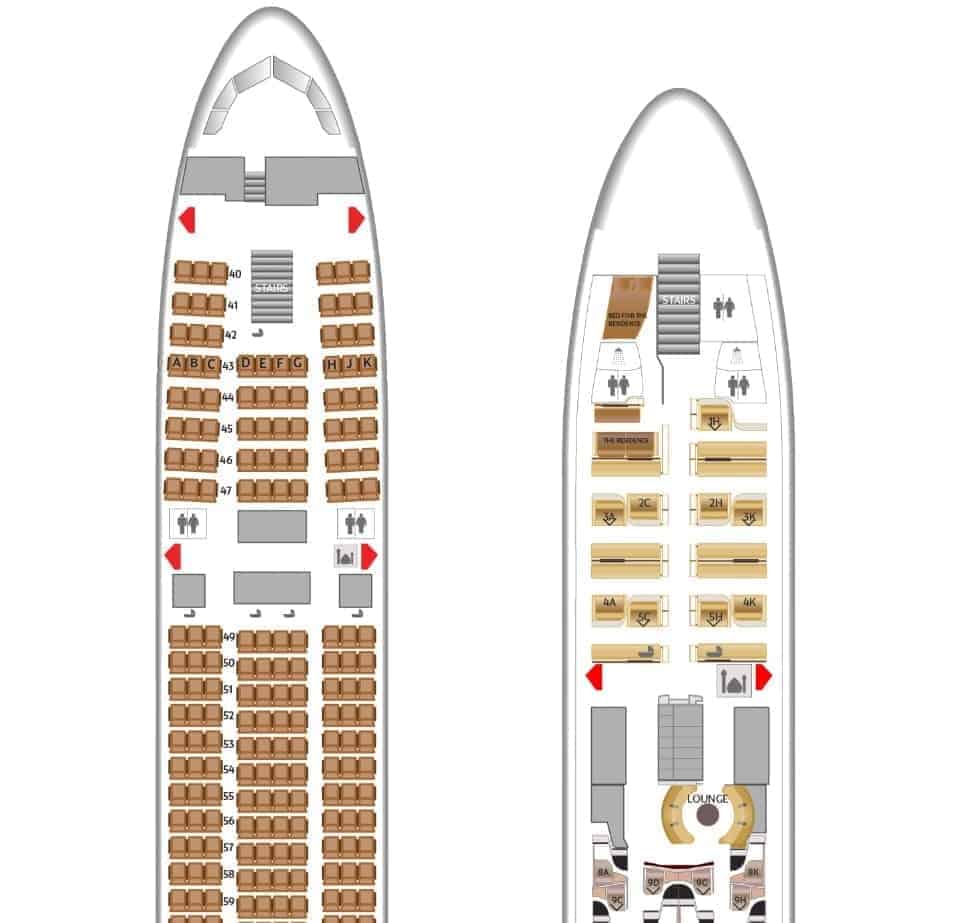 Here are a few pictures, with the gentleman still happy:

The interior storage is really clever. It is possible to put under the bed our cabin suitcase and there is a personal mini bar.

The remote control is particularly handy, with a range of ports available (USB / HDMI). The controls of the chair are also multiple:

During the boarding phase, we are offered to prepare our beds in order to maximize our sleeping time.

We take advantage of it for a small photo “Thank you! milesopedia”

We are also given pajamas and a welcome kit:

In which we regret the absence of earplugs:

The television has a huge catalog of movies and series, and is of very good quality. It is even possible to view live content or read e-magazines.

While the boarding continues, the flight attendants will not fail to provide us with champagne and appetizers.

The “Chef de Cuisine” then comes to take our orders for dinner and lunch. Knowing that it is 02:30 in the morning and that we had just had dinner in the lounge, we prefer to choose only the breakfast options.

The rest of the cabin

Shortly before takeoff, I take the opportunity to walk around and discover the bar area.

This space is located between First Class and Business Class. Here is a picture of the Business Class, which also looked very nice on this A380.

The First Class has 2 bathrooms, one of which has… a shower!

The Cabin Master will come and take the reservations for the shower: 30 minutes of occupancy of the bathroom are granted including 5 minutes of “water” time for the shower. The time limit is set by an electronic hourglass (from green to red).

And I have to tell you: it’s pretty amazing to shower on a plane! Audrey and I had chosen a time slot just 1 hour before landing, which allowed us to explore Paris, “clean and fresh”, during our long layover before reaching Nice!

I couldn’t help but savor this moment than being in a bed, on a plane! (We recognize who is #Avgeek in the couple…)

We slept most of the flight – but Audrey will admit to me that she slept better in the B777 than in the bed of this A380 considered “too hard”. #firstclassproblem

One hour before landing – and after our shower – breakfast will be served:

I take the opportunity to talk more with our “Butler” who is usually assigned to the famous Residence… except when it is unoccupied.

And even when unoccupied, the flight attendants are ordered to close the doors to avoid “prying eyes”.

He will make us make a tour of this one with prohibition to take photos. And it’s really a level above First Class: with its double bed in a soundproof room and its private bathroom… just WoW.

I take the opportunity to immortalize the moment:

A little make-up for the lady and a coffee for the gentleman before landing:

Landing that I would watch live on TV screens (a camera is fixed on the tail of the aircraft).

TheEtihad Airways First Class on A380 lived up to my expectations. Even if it is a short flight (7h30), it gives us a very nice overview of the experience! If you have the opportunity to try it, I highly recommend it!

There is a lot of availability on the Paris/London-Abu Dhabi segments (but there is still a big risk of changing aircraft…). The most coveted flight is the New York – Abu Dhabi, but rarely available.

How did I book this flight? It’s in this article! 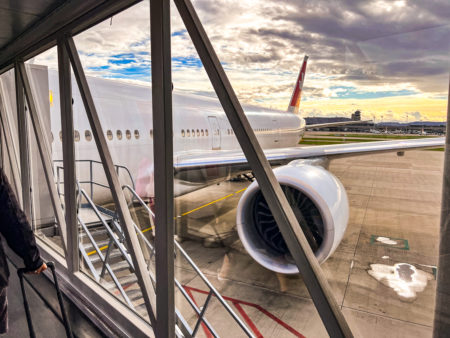